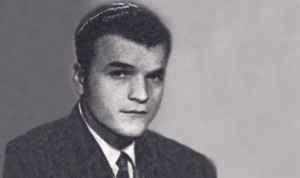 Osmar Maderna - very often called in Buenos Aires as „Chopin of Tango”
Osmar Hector Maderna, was born on On February 26, 1918 in Pehuajó (Buenos Aires) Argentina, he died in a plane crash on April 28, 1951. Pianist, composer, arranger and conductor.
His musical activity began when, at the age of thirteen, he founded the Vitaphone band with local musicians. In 1938 he went to Buenos Aires, where as a solist was performing in radio stations playing classical music and tango. He also played with the little-known orchestra of Manuel "Nolo" Fernández
In the years 1941 - 1945 Osmar Maderna together with other young, but talented musicians such as Enrique Francini, Armando Pontier and Domingo Federico played in the orchestra Miguel Calo, then called "La orquesta de las estrellas" - "Orkiestra Gwiazd"
During this period, Osmar Maderna composed and arranged m.in. such tango as:
Qué te importa que te llore
Trasnochando
La noche que te fuiste.
More or less in the middle of 1945, the Miguel Calo orchestra was terminated.

After that Osmar Maderna was trying to perform together with Raul Iriarte, who, however, very quickly has returned to the new Miguel Calo’s orchestra.
Finally, in 1946 Osmar Maderna  founded his own orchestra, with 5 musicians, with whom he played in the Calo orchestra:
Felipe Ricciardi (bandoneón)
Jose Cambareri (bandoneon)
Angel Bodas (violin)
Haroldo Ghesagui (violin) musicians with whom
Ariel Pedernera (double bass)
and additionally
Eduardo Rovira (bandoneon)
Leopoldo Federico (bandoneon)
Aquiles Roggero (violin) (he was part of Vitaphone - the first Maderna orchestra established in his hometown).

The debut of the orchestra took place in the legendary Marzotto located on Corrientes Avenue.
Musicians also appear in Tango Bar and on Belgrano and El Mundo radio stations.
The orchestra records first for the Uruguayan Sondor and then for the record label Victor.
56 tangs were recorded by the Orchestra of Osmar Maderna
The most characteristic tangoes are first recorded tango "Chique”, own composition „La Noche Que Te Fuiste” and tango vals „Pequeña”
The most characteristic orchestra voices were Orlando Verri (tenor) and Mario Pomar (baritone). Apart from them, with orchestra also were singin Luis Tolosa (baritone) replaced by Pedro Datil (tenor) and Hector De Rosas (tenor) singing (1950 - 1951) and Adolfo Rivas (tenor).

For his virtuoso style of playing the piano Osmar Maderna gained the nickname "Chopin of Tango".
It is so called today. Practically every his tango on the 2 x 4 radio is presenting: Osmar Maderna - Chopin of Tango.
The fact that such a name was the most well-deserved can be seen by listening to these tangos:
Concierto en la luna
Lluvia de estrellas
El Vuelo Del Mascardon

After the tragic death of Osmar Maderna, Aquiles Roggero created an orchestra, which he called Orquestra Simbolo Osmar Maderna. The orchestra existed in the years 1952 - 1960, continued the sound of Maderna, and the most famous of this period is the Tango Merceditas.